15 Tips to Get Started with Glaze Testing

My Introduction To Glaze Testing

I find ceramic glazes to be absolutely fascinating. I had no idea when I started working with clay that glazes would become the main focus of my life.

My first year of pottery school was mainly about learning how clay worked and different ways of making different shapes. The focus was on form, function and skill-building, not so much on colour and aesthetics just yet.

Glazing was always an afterthought and I basically ruined most of my pieces by glazing them. In first year, we didn’t make our own glazes, we just used the studio glazes that were provided.

I didn’t have a clue what glazes were made of, how they were made or what happened to them in the kiln. And to be honest, I wasn’t all that interested. I just wanted to finally make something that looked how I imagined it should.

I was trying to be an artist. Somehow I ended up in art school which is the last place I would have imagined myself a few years prior. But life is funny like that.

Then came first semester of my second year. My very first glaze technology class. This was a major turning point in my life.

First of all, wearing a respirator and weighing out powders using a triple beam balance scale made me feel super cool, like a scientist.

Yeah, I think scientists are cool! Math and chemistry were my best subjects in high school and even though I didn’t understand the chemistry of glazes yet, I felt like I was being taken back to my roots. Glaze testing felt really natural and I finally understood why someone like me ended up in art school.

That semester blew my mind. As a class, we first tested 128 different base recipes with multiple variations of each.

Then we each chose 2 base recipes and did “colour runs” with 45 different colourant tests for each base recipe. One base recipe, 45 different colourant tests

Then, we each chose 9 colourant tests that we liked from each base and made these “glaze triangles” where we blended each glaze1:1 with every other glaze, resulting in 45 more glaze colours per base. We had a lot of glaze cups and a lot of test tiles!

After taking that class, I was hooked on glaze testing. I loved trying new recipes and adding and removing ingredients to see what would happen. I would do lots of mini colour runs, testing just a few colourants with a base recipe to see how they reacted and whether I wanted to explore further.

I took lots of notes and photographs and spent countless hours staring at test tiles and recipes and coming up with new things I wanted to try.

I got to the point where I was more excited about test tiles coming out of the kiln than my own pottery. I made pots just to put glazes on them. And now, 10 years later, with thousands of tests behind me, I’m still just as curious and excited about glazes as ever.

The #1 Habit That Will Deepen Your Understanding of Glazes

After leaving school and putting together my home studio, I no longer had the luxury of glaze firings happening every few days. My glaze firings were often several weeks apart since I was making pots part-time and I was the only person filling my kiln.

Since my glaze firings weren’t very often, I made it a habit to put at least one test into every single glaze firing.

I didn’t want a glaze firing to go by without getting new information. I needed to seize each and every opportunity to try something new and see the results. Seeing results are the only way to learn and move forward.

This one little habit, multiplied by years of glaze firings has led to a much deeper understanding of how glaze materials work.

My #1 Habit: PUT A TEST IN EVERY GLAZE FIRING

We potters are so lucky that we can create our own glazes from scratch and have an infinite number of surface possibilities to choose from. The only thing that gets in our way is a lack of understanding of how our materials work and how to solve the problems that arise.

Developing a regular glaze testing habit is going to bring you closer to that deeper level of understanding with every firing.

I would love it if my story inspires you to make glaze testing a habit in your studio as well. I have some tips and ideas for you to get started down the glaze testing rabbit hole.

15 Tips to Get Started With Glaze Testing

If you’re like me and are fascinated by how glazes work, or you just want to understand glazes better so you can create unique surfaces for your pottery, here are some tips that will help you deepen your relationship with glazes and expand your palette.

Make so many test tiles that you don’t think twice about using them. Test tiles can be any shape or size that you wish. They can be extruded, rolled as a slab, squished, thrown on the wheel, smooth, textured, you name it. It doesn’t matter how you make them, it just matters that you have them available and that you use them.

2. Make test tiles of every clay body that you use regularly.

Glazes will appear different and react differently to different clay bodies. When you’re testing a glaze, test it on multiple clay bodies if you can. Test tiles tend to be small and only give a certain amount of information. It can be disappointing to find a glaze that you like on a little test tile and then glaze a whole piece with it and it looks completely different. I recommend making a bunch of test pots so you can see how glazes pool and run down vertical surfaces, etc.

To make test pots, choose a method that’s really fast so you can make lots and you’re not worried about wasting them. Make little bowls or cups or extruded cylinders. Test pots are great for filling in the spaces between other pots in your glaze firings. You can buy a sleeve of plastic drink cups, or I like to use small, clear plastic deli containers. They have flat lids so they can easily be stacked and stored.

A good way to get started glaze testing is to take the glazes that you’re already using and try 1 second, 3 second, 6 second and 10 second dips, each on a separate test tile. Label them accordingly and fire them. You may get some interesting results with different thicknesses, depending on the glaze.

Make sure your glazes are mixed really well before dipping, and your kiln shelves are well protected in case your glaze runs. 6. When dipping test tiles, make it a habit to always submerge the tile for the same amount of time.

For example, I always do a 6-second dip for test tiles. If I do more or less I’ll write it on the test tile for reference. This helps for consistency of results. The reason I do 6 seconds, which I consider long for dipping, is because a small test tile generally won’t absorb as much glaze as a large piece would. I want the test tile to be somewhat of an accurate representation of how the glaze would look on a piece.

7. Take a glaze recipe that you like, remove the colourant and test the base recipe on its own.

This will help you really see the glaze at its core, without being aesthetically influenced by its colour. Is it glossy or matte? Is it rough or smooth? Is it opaque or transparent? Does it have flecks and variation or is it uniform? Does it craze or not? Does it run or is it stable?

Then you can compare the base to how it looks with colourants and see how the colourant has affected the melt and surface texture. Colourants can change more than just the colour.

If you’re not sure which are the colourants, they’re typically copper, cobalt, iron, chrome, manganese, nickel, rutile, titanium, zircopax, tin and mason stains. Same glaze, with and without colourants

8. Test the base recipe from tip #7 with different colourants.

Examples of colourants you could try are:

There are more colourants, but those are the most common for when you’re just getting started.

Making 200g also gives you enough glaze to submerge your test tiles without hitting the bottom of the cup. Of these three scales, the triple beam in the middle is the only one that will weigh less than 1 gram

10. If you want to test a few different colourants in one base, make a large batch of the base and then divide it into smaller test cups before adding colourants.

For example, if you want to test 5 different colourants, make 1000g of the base, mix and sieve the glaze and then divide it equally into 5 different test cups. This will give you approximately 200g of the base materials in each test cup. Then add the colourants as percentages of 200g. Then I added different colourants to each cup

11. After you’ve tested different colourants in a base recipe, try blending them together.

12. PUT A GLAZE TEST IN EVERY FIRING

This is the #1 habit that will lead to a deeper understanding of your glazes.

13. Don’t forget to use witness cones in all your glaze firings.

You’d be surprised at what a difference a higher or lower temperature firing will make on your glaze results. An example of a cone pack. I put at least one of these in every firing.

14. Take lots of notes and photos of your process and results.

Keep a glaze testing journal. Write everything down. You never know when the smallest detail can make a big difference. When you keep track of it all, you will start to connect the dots on which factors are influencing your results.

Glaze testing makes unloading the kiln even more exciting. There’s something about coming up with a test you want to try, making it and then seeing the results that feels so empowering.

If you see glaze testing as a chore, you’re probably not going to do it very much. But if you see it as an exciting way to add a new level of creativity to the ceramics process, you’ll probably make some interesting discoveries. Me in my respirator. Safety first!

I hope this post gave you some ideas for tests you can try. This is a very broad overview of ways to test glazes. If you have any questions or want me to go deeper on one of the tips, let me know in the comments.

Do you already love glaze testing? What are some of your favourite tests or tips to share? Let me know in the comments. Do you have any kiln sitter tips to share? Please leave a comment below.

If you love learning about and discussing glazes, I’d like to invite you to my free social learning Facebook group called Understanding Glazes with Sue. The group is full of videos and discussions about firing, mixing glazes and fixing various glaze issues. Please join! 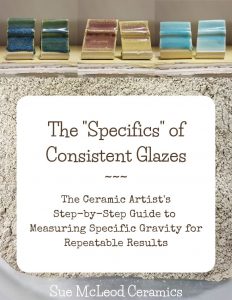